The poet, amu nnadi, has written six collections of poetry. His works can be divided according to the stages of his evolution as a poet. Two earlier collections, ‘a river’s journey’ and ‘a field of echoes’ (both published in 2016) appear to be a precursor to ‘the love canticles’.

Divided into five sections, ‘the love canticles’ begins with “earth ache”. Here, through 25 poems of wanderlust and melancholic contemplations, the sensation of an aching earth as a metaphor for an aching heart is revealed. The earth sees itself through the intrinsic and extrinsic contemplations of the poet. And in these reflections, the earth aches for something before and behind itself.

These innermost contemplations, through the deliberation of the poet, make themselves evident. The deliberations which lead to these poems are part of the poet’s vocation, like the meditative hymns of a religious service. The poems in the first section are mostly a meditation on encounters and love, setting the motion for what one discovers in ‘the love canticles’.

The second section of poems is titled ‘unfurling’. In 26 poems, amu nnadi explores love through a description of emotions. This evokes in the reader similar emotions of affections with which the poems were written. The evocation of love lies among many other things, in its description. In this section of the book, amu nnadi attempts to describe love. Everyone becomes a poet in trying to describe love, but the words of a poet in love are even more animating.

The collection assumes a darker, deeper tone in the fourth section, titled ‘falling’, by exploring pain. This is part of the thoroughness which this collection exhibits, because love is never complete without pain. The sufi poet and mystic, Rumi once wrote: “Love is better when mixed with pain/ in my town, they will not call you a lover/ if you escape the pain.” And so amu nnadi explores the coldness, uncertainty, heartbreak and bleakness which come with love and its constant conflict with human imperfection. In this part, the collection becomes almost complete.

There is a final section titled, ‘miscellany’, and it contains an epitaph that is outside the main body of work. It is a final exaltation of love and an endnote upon the collection. It ends with the note, “This is not part of the one hundred poems. It is but a sigh, a cup of water at journey’s end.” It is significant of the exhaustion which comes with creating art and loving, punctuated with a sigh of satisfaction. 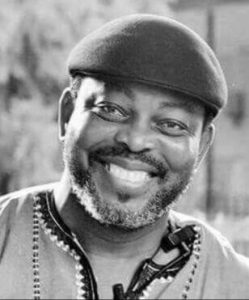 The collection in its structure follows an evolutionary trail of amu nnadi’s previous collections. But it strives to heighten the effect his previous works have had. Perfection is impossible, but art does not strive towards perfection, for where perfection is possible, there is a limit. And art is limitless. There is therefore no limit to what the poet can strive to attain with language.

Somewhere in ‘the love canticles’ amu nnadi avers: “What makes the poet special, and in this lie his torment and madness, is that he sees what does not exist, and writes it into being.” Perhaps this is true. But what is even truer is that the poet sees what is not apparent and writes it into visibility. Through this, the poet reveals the profoundness of language.

Indeed, ‘the love canticles’ is an alchemical phenomenon. It is a project which attempts to achieve a purity of vision of life’s richness by seeing it through a vantage of love and the point of view it affords. Through this masterly attempt, amu nnadi demonstrates what the poet, W. S Merwin meant when he once said: “Poetry is seeing the world with fresh eyes.”

The poet, amu nnadi has given us poetry in the themes of all the above, but his themes have found their centrality in love. From ‘a river’s journey’ to ‘a field of echoes’ and now, ‘the love canticles’, amu nnadi has begun and completed the vision of a trilogy, an body of poems that expands our vision and perception of life in countless ways through the purifying lens of love.

The result of this endeavor is an anthology that explores a theme not commonly explored in the continental scene, with a dexterity to be admired, at any level which poetry has ever been written. The carefulness of amu nnadi’s craft, the vividness of his vision and the accuracy of his imageries are characteristic of a gifted poet whose art has passed through alchemical furnace of decades of long-suffering and devotion, resulting in art in the realm of near perfection.